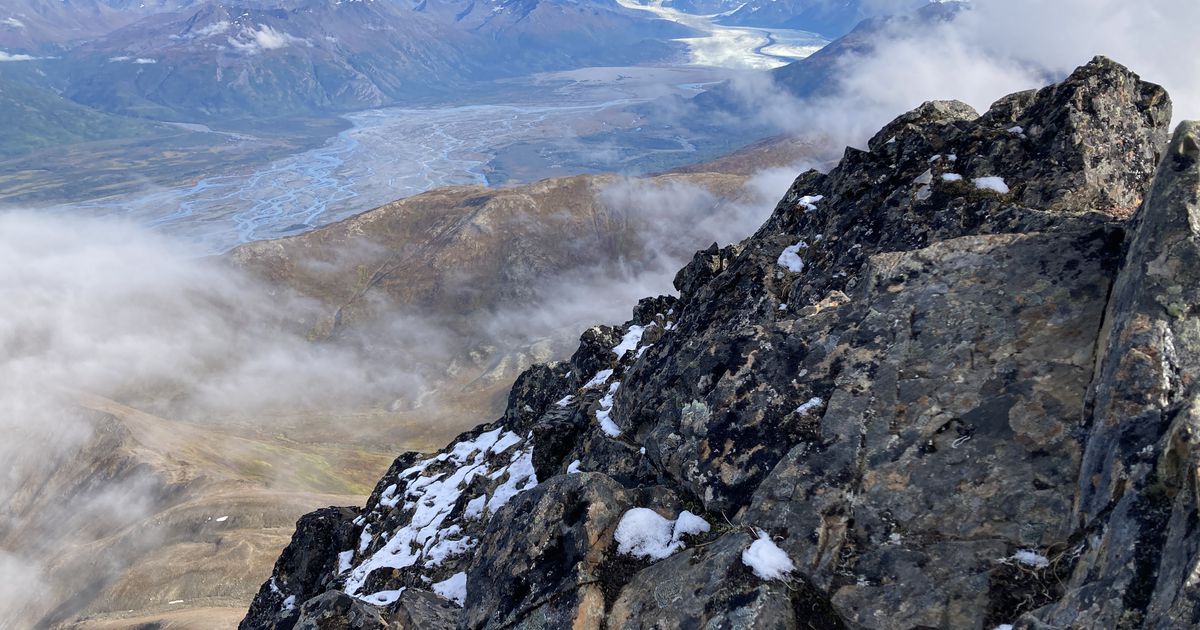 When I park in my driveway, Pioneer Peak towers over my house. It’s the kind of “mountain-mountain”, as my sister would say, that sometimes gives me the impression of living in a postcard or a snow globe.

Part of the drama of Pioneer Peak is that it rises steeply from the vast, flat, almost sea-level landscape that characterizes the valley floor.

At 6,398 feet, it’s so high that it blocks out the sun entirely for months in the winter. Entire neighborhoods of Palmer are located in what is locally referred to as “shade,” and in the spring, shade lingers the longest in homes near the base of the mountain.

As often as I have watched Pioneer Peak, I have never climbed to the top.

This is a legendary hike, and it’s etched in my head that you only attempt it on the longest days of the year because it is so long and exhausting. The trail to the south summit is about 14 miles round trip with a cumulative elevation gain and loss of 7,000 feet. Reaching the northern summit requires mountaineering equipment and experience.

When my husband and I took to the trail a week ago, I had a vague idea that we could make it to the top, but I hadn’t thought about it. This is how I like to hike, anyway. Not focusing on the top relieves the pressure, helps me stay in the moment and not get too locked into a single outcome.

But we both wanted a big day. I packed two giant water bottles, an elaborate sandwich, plenty of snacks, diapers, and a headlamp so I could stay outside for as long as I wanted.

We started the climb at 9.45am. Not exactly an alpine start, but a solid one for our Saturdays.

Starting a hike and a day like this is intimidating. I know it’s something I want to do, but it also involves work. I always think I’m going to feel fresh and crisp at first. But since the Mat-Su trails tend to take the more direct route without wasting time on switchbacks, I was out of breath pretty quickly.

The belt straps of my backpack dig into my breakfast-filled stomach. It helped me focus on the beautiful fall foliage around us and take it step by step.

It also helped that there were hikers blasting Twenty One Pilots from a portable speaker not too far behind us. There was no way I was spending my time in the woods listening to this, so I did something that I never do. I picked up my pace.

My mountain runner husband was quietly delighted behind me. We quickly covered two miles.

I have walked the first two miles to the picnic bench too many times to be able to count, but only went beyond a few times.

The trail has many distinct phases.

The first two miles meander through thick, almost wet foliage, breaking only for the occasional view of the Knik River below and, eventually, the glacier.

After the first picnic bench the trail descends and winds through muddy, rooted terrain until it reaches another picnic table, which for me means the start of the wide open pasture. . At this point, the view opens up significantly, to enjoy a full panorama of the river, valley and even the Talkeetna mountains in the distance.

I have looked around a lot at this point as it is a solid effort and reward.

This time we continued.

The trail made its way straight through a vast alpine landscape, gaining about 1000 feet elevation per mile, with false summit after false summit.

The surreal beauty of the red and yellow fall colors contrasting with the blues of the sky, glacier and river took my mind off my mind. Wispy clouds marked the trail, moving quickly with the breeze and adding just the right amount of drama with little threat of actual rain.

When we reached the ridge line, about a mile high, I told my husband we had walked through the air. I had never been this far on the trail before.

We ate sandwiches to celebrate. As I ate, I was speechless at the incredible sight on either side of me. It was my favorite type of ridge line, the kind where I don’t have to choose one side to look at so I can enjoy both.

I also began to contemplate more seriously the summit of Pioneer Peak, which suddenly dominated my view with its rocky nose propelled into the sky.

It didn’t look very welcoming. But after a summer filled with hikes, runs and jump squats, I still had life in my legs to go on. I didn’t want to come back down without reaching the top.

My husband was neutral, he had done it before. I decided to continue.

Starting on the ridge line, the view was dizzying on either side. To my left was a deep valley with Lake Eklutna on the other side and Cook Inlet in front; to my right was a large, low pool at the foot of Pioneer Peak, filled with fall foliage and moving cloudy shadows interspersed with sunlight.

I tried to focus on planting my feet in front of me instead of being distracted by the view, which was beautiful but also slightly dizzying.

As the boulder to the top got steeper and the rocks and scree loosened underfoot, I reminded myself that I could turn around at any time if I wanted to. I continued to step forward until I finally pulled myself over the last boulder to the top. Looking around I was so dizzy and felt so insecure that I was on the verge of tears.

Often times what looks like a pointy, pointy top from below will have a small, flat shelf once you reach the top. But it was ruffled and jagged until the end. I could barely find a place to sit down and prepare my foot. My arm was slung over the other side of the mountain; I had an almost 360 degree view, with the north summit still in front of me.

I told myself to keep it together and enjoy the view. I had the presence of mind to take a few photos, because even in my heightened and anxious state I could see that it was breathtakingly beautiful.

As I started to focus on the scary idea of ​​going down, I reminded myself that I could do it. I took a few breaths, took a few pictures, and then slowly – very slowly – started my descent.

Never have I been so grateful for having a big ass that I could use to wedge myself between skinny rock crevices to slow me down in very steep places where only scree was underfoot. I took it almost comically slowly, only looking at my next step, not the dizzying views all the way down.

One step at a time, I have reached familiar ground. The rest was work, but there was solid ground underfoot with spectacular views without being terrifying.

My opinion ? Pioneer Peak is as spectacular at the top as it is at the bottom. Glad I made a push for the top.

I don’t feel the need to do it again either. The summit is quite beautiful from the safety of my driveway.