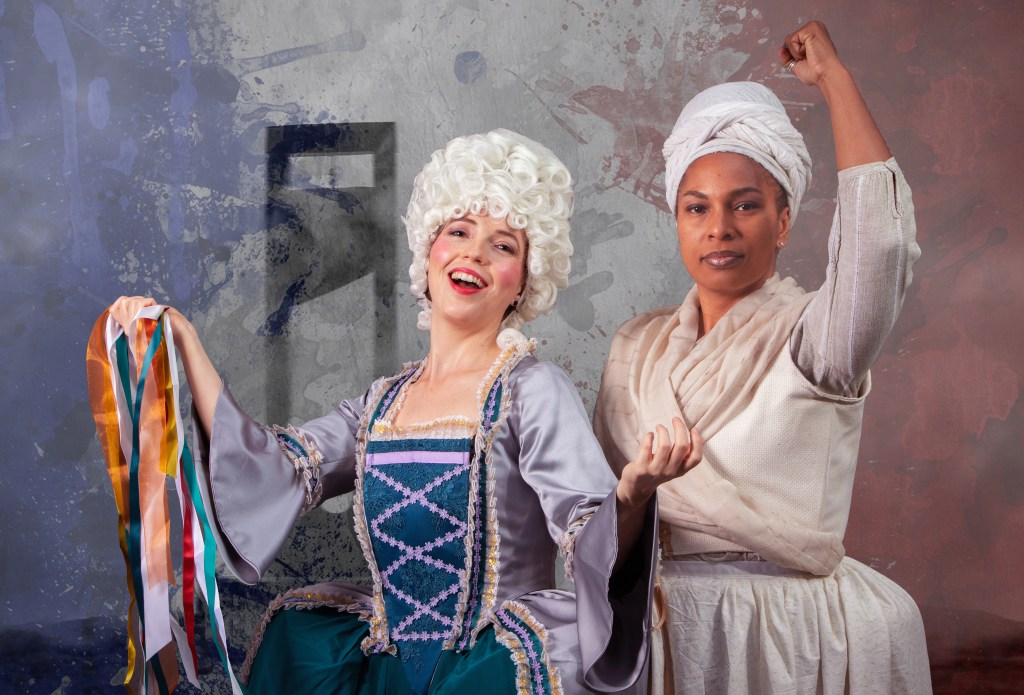 The Palo Alto Players production of playwright “The Revolutionists” by Lauren Gunderson deserves a large following because it is both funny and very serious.

The play manages to find humor in the “Reign of Terror” in Paris during the French Revolution in 1793 when, after the creation of the First Republic, a series of massacres and public executions took place in response to the public cries for revolution, anti-clerical sentiment and accusations of treason.

The comedy comes in the first act, with frenzied feminist playwright Olympe de Gouges (a somewhat shrill Gabriella Goldstein) tirelessly seeking a theme to use for her next play. Its writing room is a stunning, dusty color study with floor-to-ceiling book shelves.

Olympe and her Haitian friend Marianne (soft-spoken Kimberly Ridgeway) are interrupted by Charlotte Corday (Katherine Hamilton), who storms through the door demanding that Olympe write a sentence for her to scream as she stabs the reporter. French radical Jean Paul Marat in his bathtub. Charlotte seems determined to do the dirty deed, so much so that other women nickname her the “young assassin”.

Her visit is followed by the introduction of the play’s most intriguing character, Marie-Antoinette, who makes her entrance. As the unlucky queen, Olga Molina is nothing short of perfection, with her innocent looks, petty pouts, and hilarious witticisms. Whenever Molina is on stage, “The Revolutionists” is fascinating.

In Act 2, “The Revolutionaries” becomes a much more serious play. The guillotine scenes are effective without being confusing.

While the play’s four characters are clearly women ahead of their time, “The Revolutionists” is about the indomitable of the human spirit. And The Players’ production, directed by Tessa Corrie, is a thoughtful, if at times patchy, evening of theater.

Lisa Claybaugh’s costumes are fine, although their hoop skirts make the women appear to be carrying an extra 20 pounds around their hips. Shiboune Thill does a great job with hair, wigs, and makeup. Scott Ludwig deserves credit for his stage design as well as his props.

“The Revolutionaries” takes place until November 21 at the Lucie Stern Theater in Palo Alto. Due to its adult content and language, this show is recommended for ages 16 and over. COVID protocols are followed and masks are mandatory inside the theater.

“It kind of pokes fun at struggles”: Métis Youth Council member on false allegations of indigeneity