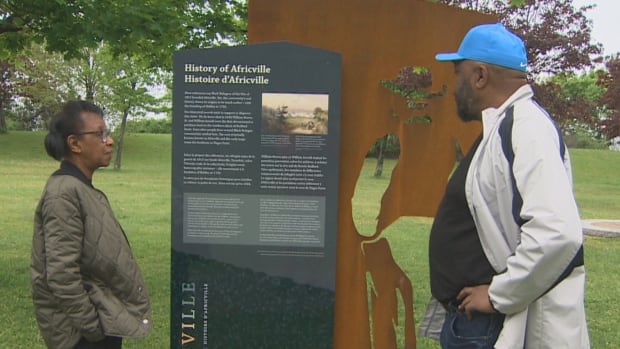 
Visitors to Africville Park in Halifax will now have a better idea of ​​the lives of residents of the black community that once occupied the site.

Five new information panels were installed at the end of May.

The steel panels are the result of a collaboration between the Africville Genealogy Society, Africville Heritage Trust and the city.

The Africville interpretation project is a partnership between @AfricvilleHT & the Africville Genealogy Society, in collaboration with HRM. Five steel panels have been installed in Africville Park, showing the history, families and daily life of former Africville residents. pic.twitter.com/xSN2Ev8mOg

The panels explore different aspects of the community that used to be along the Bedford Basin.

The community had shops, a post office, and a beloved church, but Africville did not receive municipal services such as running water, sewers, or paved roads. It was considered a slum by some residents of Halifax.

In 1964, the city of Halifax voted to remove Africville residents to make way for industrial development.

Residents with title deeds received compensation equal to the value of their homes, but residents without title deeds – many of whom had lived in Africville for generations – received $ 500.

Bernice Byers-Arsenault, a former Africville resident, said she hopes the information on the plaques will help open up the community’s history to members of the public.

“They are beautiful and I encourage people to come and see them,” she said. “It just keeps our minds alive.”

Byers-Arsenault said she was young when the community was destroyed and recognizes the need to move forward while keeping the spirit of Africville alive.

She said Africville was “a big happy family” engaged in the same activities as other communities before the city took everything away from them.

“When they took that, they took a part of our life,” she said.

Lyle Grant, former Africville resident and chairman of the Africville Heritage Trust, said the signs marked three years of collaborative work. They have been delayed by the pandemic but the message they are delivering is “loud and clear”.

The signs, he said, were designed to show how people lived in Africville and the type of people who lived there.

“It also lets people know that there is more here than just a park,” he said.

According to Grant, further changes will be made to Africville Park. There are plans for a marina within two years.

He hopes more people will explore Africville Park and some of its lesser-known features, like the lookout at the end of Novalea Drive, which offers stunning views of the harbor and park.

“It’s going to be beautiful here – it already is – but we’re just going to add more,” Grant said.