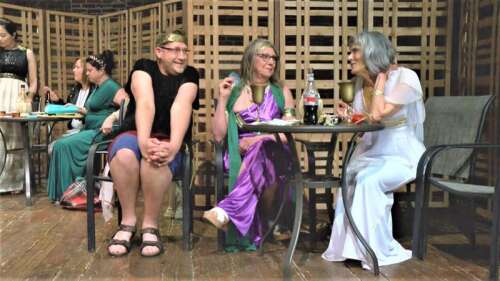 Crowded Kitchen Players will present their first live production in over a year.

The troupe presented “Dogcatcher” last fall, filmed in seven episodes for “Live from IceHouse Tonight”. It can be viewed online.

The play, about a group of crooked politicians, entrepreneurs, judges and lawyers who meet every week for happy hour, is written and directed by Ara Barlieb, founder with Pamela Wallace, of Crowded Kitchen Players.

“Corner Booth” takes place in a small pub on the outskirts of a mid-sized Commonwealth town where every Friday the region’s corrupt brokers meet to drink and determine the fate of the citizens who put them in power. However, rather than costumes of power, Barlieb chose to dress his cast as cruel and omnipotent Greek gods.

“’Corner Booth’ serves simply to illustrate that evil was invented by humans without any need for the help of demons and without any hope of being saved by the gods,” says Barlieb.

Ellie Snyder (Trish Cipoletti) is a county executive who moves into the booth around the corner of the bar to meet with political party boss Molly Kessler (Pamlea Wallace).

Barlieb says Ellie represents the fiscally conservative majority in the county she leads and is “known for her disdain for public schools, reproductive rights, same-sex marriage, gun control and all kinds of aid programs. government “.

Molly is joined by her daughter Heather (Dawn Daignault), “who has been in rehab and only avoided prison thanks to the influence of her mother.”

Molly wants Ellie to run for a higher position. Ellie’s eyes are on the governor’s seat.

Things start to escalate when a group of angry parents, whose children have been arrested for petty crimes and sentenced without due process, show up to confront the judges. Spirits erupt and charges are leveled as fights erupt and the night begins to turn drunken into chaos.

“Tragedy abounds, so we laugh about it,” says Barlieb. “What else are we supposed to do?

“In ‘Corner Booth’, the greatest tragedy is not that the events of the play are inspired by real crimes and atrocities, but that they no longer surprise us.”

The language of the script is coarse and the subject matter is mature and often gritty.

Tickets: http://www.ckplayers.com/tickets; or at the door.

“Curtain Rises” is a chronicle about theater, live performances, their actors and the directors and artists who direct them. To request coverage, email: Paul Willistein, Focus Editor, [email protected]